Half have mild autism 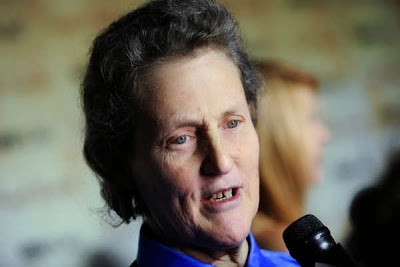 
The story of Temple Grandin, the woman diagnosed with autism at age 2 who went on to earn her doctorate in animal behavior, is remarkable because it is a rarity.

That is, unless you ask her.

Grandin, who will be speaking at two events on the Monterey Peninsula this week, is challenging the way the world views people with autism by saying her success is far from unique.

"Half of Silicon Valley's got mild autism, they just avoid the labels," Grandin said in a phone interview. ...

"Einstein would be labeled autistic today," she said. "Steve Jobs was probably on the spectrum." ...

"I knew people in college who were probably on the spectrum. They were just called geeks or nerds before," she said.

She is just describing personality characteristics, not a disorder. Einstein and Jobs were famous for being good communicators, among other things.

So many have these characteristics because the Asperger definition is like male brain. Grandin is a woman, but she looks and talks like a man.
Posted by George at 8:00 AM

Big deal, she looks like a man. Do you really care about that ?