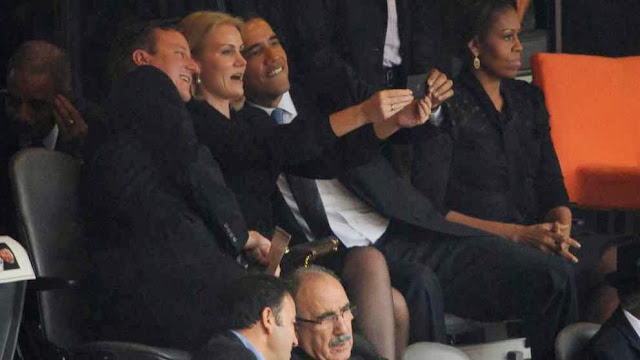 My bookshelves sag with encyclopedic volumes arguing that America and the West are in decline. But proving that a picture is worth a thousand books, the “selfie” seen ’round the world ends the argument.

It’s official — the government of the United States of Obama consists of boobs and bores and is led by a narcissist. It is no consolation that Great Britain joins us in racing to the bottom.

President Obama’s flirting with Denmark’s prime minister would be shameful on any occasion. That it happened at the memorial for Nelson Mandela only adds to the embarrassment.

But the “selfie” episode also symbolizes the greater global calamity of Western decline. With British prime minister David Cameron playing the role of Obama’s giggling wingman, the “look at me” moment confirms we have unserious leaders in a dangerously serious time.

She's married to a fucking child.


Why wouldn't the bitch be miserable?

"OMG! A woman has to be all cheerful and fake all the time!"

No - any person entertaining foreign dignitaries has to be cheerful and fake (unless they are being all serious). You don't actually have any business bleeding your feeeelings all over the shop. What if everyone did it?

Oh, that's right. In a woman's world, the high-status women get to bleed their feeeelings all over the shop, and the lower-status women have to "make nice". That's the way their society works.


Ha, you weren't the only one who noticed. The pictures don't show it but she made him sit on the other side a few minutes later. Then she turned her back on the chick, lol.

If Obama's mother or grandmother were still alive, they'd be equally dismayed to see him yukking it up at the funeral of a world historical figure who championed liberty and opposed apartheid.