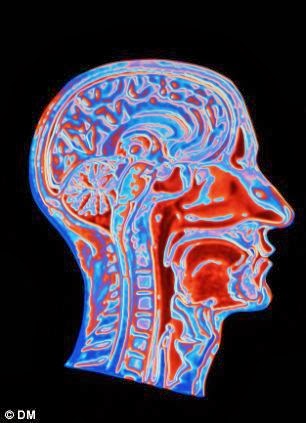 Growing up without a father can permanently alter the BRAIN: Fatherless children are more likely to grow up angry and turn to drugs

Growing up without a father could permanently alter the structure of the brain and produce children who are more aggressive and angry, scientists have warned.

Children brought up only by a single mother have a higher risk of developing ‘deviant behaviour’, including drug abuse, new research suggests.

It is also feared that growing up in a fatherless household could have a greater impact on daughters than on sons.

This is based on mouse studies, so may not be directly applicable to humans. Nevertheless it gives a biochemical mechanism for how kids are harmed from the lack of a father in the home.

I show the brain scan because that always makes any brain article seem much more scientific.

‘This suggests that these mice are a good model for understanding how these effects arise in humans.’ The report said the behaviour of the mice was ‘consistent with studies in children raised without a father, highlighting an increased risk for deviant behaviour and criminal activity, substance abuse, impoverished educational performance and mental illness’.

It added: ‘Our results emphasise the importance of the father during critical neurodevelopmental periods, and that father absence induces impairments in social behaviour that persist to adulthood.’ Dr Gobbi said the results suggested both parents are vital for children’s mental health development and hoped the findings would spur researchers to look more deeply into the role of fathers.

A separate report by the Centre for Social Justice, published in June this year, found that more than 1million British children currently live without a father and have no adult male role model, a figure that is rising by 20,000 a year.

Some of the poorest parts of the country are becoming ‘men deserts’, the report found, because there are so few visible male role models for children.

In the Manor Castle ward of Sheffield 75 per cent of households are headed by a single parent, most commonly a woman.

A large number of our social ills can be attributed to kids being raised by single moms.
Posted by George at 8:00 AM

A letter came today from an insurance company informing me of the name of the policyholder who owned the other car in an accident in July. Naturally it was a woman, quite possibly a single mom, of the young man who fled the scene after a low-speed fender-bender.

A couple days ago I found a business card from a private investigator who wanted to scope me out as a victim because the kid's been charged with driving on a suspended license and leaving the scene of an accident. Apparently a victim has a legal right to make a statement at sentencing and the defense attorney needs to know my feelings before negotiating a plea bargain. The P.I. told me the insurance policy number so I made a claim.

Now that I know the driver's name as well as his mother's, I looked him up on instagram and found this:

Looks like more than fatherlessness has altered the brain of this kid. I'll bet he's wishing he'd showed me his insurance information in July like a man, like my father taught me always to do.

I'm not claiming I never smoked dope in college or that I've never done anything worse than small claims hit & run, but these kids these days...

On the way home from a book reading by Jonathan Franzen and as fact is stranger than fiction, this kid & I ran into each other figuratively at a gas station this evening. He made a slight comment and much to his surprise I addressed him as Mr. X. I showed him the damage to my car and it all came back to him. He does have a dad as well as a mom. He is in a bit of trouble and has been feeling guilty. We had a little chat and I wound up shaking his hand and wishing him good luck.