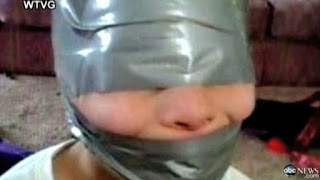 Here is an Ohio story about the latest police overreaction to a harmless parenting practice:


A MOTHER who posted a text message with a picture of her son with his head covered in duct-tape says she has done nothing wrong.

Tiffany Ennis, 31, of Sandusky, Ohio, has pleaded not guilty to two charges of child endangerment.

Ennis allegedly wrapped duct-tape around the forehead, eyes and mouth of her son, eight - which she posted to the boy's father Rudy Yado who contacted police - and to the head of an 11-year-old girl, ABC News reported. ...

According to the report, Ennis told police the children were not hurt and no marks were found on them. Ennis said it was not meant to be hurtful and they were joking around. ...

Upon investigating the complaint, Newell said Ennis was subsequently arrested for duct-taping the children's heads and eyes, and transported to the Sandusky police department. She is scheduled to reappear before on May 30.

It is becoming illegal for a kid to have any fun, if there is a bitter ex-spouse with an itchy 911 finger.

I’m a middle-aged, never-been-married woman. I rarely, if ever, bring up an interest in men during therapy sessions. Still, my therapist diverts the conversation to cross-examine my efforts to find a husband. I am unsure ... Is it unethical ...?

... But if she continues to force an ethnocentric, inapplicable version of self-actualization onto a person who is not troubled (or even interested) by the problem she imagines, it’s not serving your needs. Find a new therapist.

No, it is not ethnocentric to assume that a single middle-aged woman might be interested in finding a man. Women of all ethnic groups do. The therapist is trying to help. If she does not want help, why is she seeing a therapist? The therapist is just doing what he is paid to do.

I was behind a woman at the supermarket who was trying to buy a precooked chicken with food stamps. The register rejected the purchase. The store manager explained that there was nothing she could do: the law says that food stamps cannot be used on hot-food items like this. The chicken was $8 — I suppose a raw one is half the price. ... I offered to swap items: If she paid for $8 worth of my food with her stamps, I’d pay for her chicken with my cash. I know this is breaking the law (and a law that I think is a fair and sensible law, in principle). ...

This is an ideal case for those who like to debate the semantic difference between “ethical” and “moral.” A strict interpretation of this act would suggest that you behaved unethically (by ignoring the law) but morally (by doing something good for a person in need). ... When forced to choose between the letter of the law and its spirit, the spirit is preferable. To justify this program’s central purpose, you had to defy its regulatory technicalities.

No, this is welfare fraud. The program’s central purpose is to supply free food, not to pay the store $4 extra dollars to cook it. You cannot buy restaurant food with food stamps, and it doesn't matter if the recipient says that she is too lazy to cook the chicken. It is immoral to steal from the taxpayers in order to save some welfare queen the trouble of turning on the oven for 30 minutes. The NY Times is promoting a culture of law-breaking, stealing parasites.

Update: And now there is the ridiculous lawsuit:

A suburban Chicago school board member has filed a lawsuit accusing a teacher in her district of duct taping her 11-year-old son's face after telling him to stop talking in class.

The lawsuit filed this week in U.S. District Court by Princess Dempsey on behalf of her son says the Lindrop School teacher put an index card on the boy's mouth, then wrapped duct tape around his head.