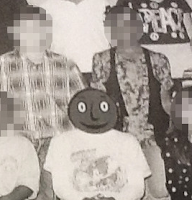 Schools are always asking parents to sign permission slips. Here is what can happen if a parent fails to sign. The HuffPost reports:

A second grader at Sawgrass Elementary School in Sunrise, Fla., who didn't have the parental consent form to be in his class photo was nevertheless included, but in a way that has shocked school officials and the boy's parents, WPLG TV reports.

Per the elementary school's request, The Huffington Post blurred the faces of the other students in the photo, but the second grade boy can still be seen with a crude, brown-colored, smiley face placed over his face.

Maybe there is some sort of racial angle here. The kid's parents might have thought that they were being punished by making fun of his brown skin with a caricature of his face.

We live in the Facebook age of no privacy anyway. Probably all of these kids have been to birthday parties where group pictures have been posted on FB without anyone signing consent forms. Maybe it is rude and invasive, but get over it. Facebook is going to get worse before anyone does anything about it.
Posted by George at 8:00 AM