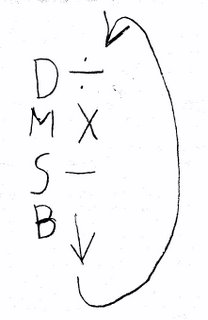 I went to the parent-teacher conferences for our 2 kids last week. My ex-wife made appointments without telling me, but the kids told me about it. She acted surprised that I planned on going, and said that I had never gone before. I reminded her that I had gone lots of times. She said, "You've never gone willingly."

Hmmm. Did somebody twist my arm? She claimed that I once argued that it wasn't efficient for us both to go. Now that sounds like something that I might have said. It is not really necessary for both of us to listen to some dopey teacher read a report card to us. So I told my ex-wife that I wouldn't need to go if only she will give me a full report. There is no chance of that anymore.

At the parent-teacher conferences, the teachers each showed us a battery of standardized tests. The 1st grade teacher told us that our kid needed work on her middle vowel sounds because on one of the tests she spelled "chirp" as CHERP. She also mispronounced some proper names on the reading test, such as saying Liza instead of Lisa.

The one thing that I did learn was that there is another girl in the class who is also so far ahead of everybody else that she is not learning anything either. At least they can talk to each other.

The 4th-grade teacher also gave us a stack of test results. Our kid aced the math tests, only missing 2 questions. One was "What is a hundred less than 8,002?". She answered 7,902. I told the teacher that I wanted to do some grade grubbing on that one. She said that a lot of students got that problem marked wrong. Then she got up and walked across the classroom. I thought that she was going to get the answer key to see if it was wrong. Instead she got a pocket calculator, and confirmed that 8002 - 100 = 7902.

This teacher was mainly proud that I had heard from my kid how mean she is. The teacher's name even rhymes with "mean". I am not belittling this; I think that she has done a good job in restoring order to the classroom. There are a lot of undisciplined goof-offs in the class, and it is difficult for the teacher to teach anything to those kids.

I found out that my ex-wife was angling to get our 4th-grader into some sort of gifted program. The teacher asked whether the child could do long division. I assured her that I had taught her long division at home. Long division was not on the tests.

Today, our 4th-grader was sick and went to bed early. Our 1st-grader used the chance to practice her own long division. After a while, I noticed the above diagram. She explained that she does Divide, Multiply, Subtract, Bring down, and repeats. She remembers the D-M-S-B because it also stands for Dad, Mom, Sister, Brother. That seemed clever to me; I am not sure if she figured that out herself or not. She certainly didn't learn it from the school. She needs some practice, but she has the main ideas. No, they don't have a gifted program in first grade. The school is much more concerned about what to do about the class bully. Apparently one bully has punched out a couple of other kids already, and one other kid has even dropped out of the school because of the bully.
Posted by George at 11:03 PM