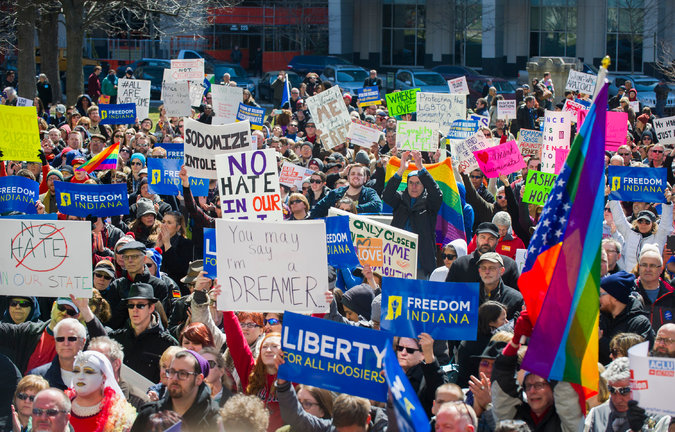 A NY Times article on gay intolerance had this picture, showing a protester with the sign saying "Sodomize Intolerance". Sailer has located previous usage of such a sign in 2008.

Update: Another Indiana protester sign said, “You can’t clarify hate.” Really? So once these leftist bigots think that you are a hater, then nothing you say or do will make any difference. You cannot clarify your opinion.

A TV network had to apologize for this:

In a transcript provided to Business Insider, McGuirk calls Cook "this hypocrite, this bigot hypocrite," referring to the Apple chief's statements against religious freedom laws expressed in a Washington Post editorial and a series of Twitter statements. ...

McGuirk argued that Cook "won't allow these religious people to exercise their freedom," and challenged Cook to stop selling products in countries like Saudi Arabia, Nigeria, and Iran, where "they not only dump on women and treat them as second class citizens, but as I said, they would execute gay people."

The apology was delivered on-air by McDowell earlier today.

"The Fox Business Network would like to make it clear that we in no way believe that [Cook is a bigot]. Mr. Cook runs a company that is an American success story and Apple has become a worldwide brand," she said.

I agree that Cook is a bigot. Yes, Apple is an American success story, but that makes his bullying all the more despicable.

If a baker were asked to bake a cake with Nazi or Commie or Ku Klux Klan symbols on it, then I would say that he should not have to do it. Yes, you can call it discrimination, but it is also freedom to associate with your beliefs. There used to be landlords who would not rent to opposite-sex couples living in sin. That is probably not even legal anymore, but it ought to be legal to make such decision without being second-guess by govt bureaucrats.

A small Indiana pizza restaurant got tricked into answering a press hypothetical question about catering a gay wedding, and now they are fleeing for their lives.

On the subject of free speech, here is another leftist feminist trying to suppress it:

Sen. Dianne Feinstein (D-CA) wrote on her website that the 1971 book on bomb making, which may have aided the terror suspects in some small way, should be "banned from the Internet.”

The senator seems to fail to realize that not only has The Anarchist Cookbook been in print for decades (it’s sold on Amazon!), but also has openly circulated online for nearly the same period of time. In short, removing it from the Internet would be impossible.

The book does have bomb-making recipes, but I am told that some of them are quite dangerous, and would require a lot of experimentation if you really want to make a substantial bomb and not kill yourself. But if you are willing to do the experimentation, then there is no way to suppress the info on the chemistry of explosives. Fortunately, bombs are not that easy. The 2 Boston Marathon bombs only killed 3 people.
Posted by George at 8:00 AM