Apple and other Leftist Bullies

Gays sometimes claim that they just don't want to be bullied. No, it is now clear that they want to be the bullies. They want to stop Indiana from having the same religious freedoms that people in other states have.

As a company, Apple is all about bullying customers, employees, reporters, suppliers, and everyone else. It intimidates reporters and developers.

Apple's reputation is largely that of a big bully. It was found guilty in court of anti-trust violations against its own employees and ebook customers. Its business model is all about customer lock-in, and limiting customer choice. It is famous for justifying this by saying that customers do not know what they want. For example, it used to claim that no one should want a cell-phone with a big screen.

Its management is all-white, except for a token black women in personnel to reduce lawsuits.


Regardless of what the law might allow in Indiana or Arkansas, we will never tolerate ...

This isn’t a political issue. It isn’t a religious issue. This is about how we treat each other as human beings. Opposing discrimination takes courage. With the lives and dignity of so many people at stake, it’s time for all of us to be courageous.

No, this is about Apple aligning itself with the Intolerant Left. Here is what the Indiana law really is.

Apparently the Apple and other leftist bigots are saying that it is possible that the US Supreme Court will mandate same-sex marriage in June, and then some religious baker in Indiana might not want to make a wedding cake for a gay couple.

The vast majority of bakers are happy to make a cake for anyone who pays. If there is one who would not, it is not clear that he would get relief from this Indiana law, but why the big concern? Why is the Apple Left so bigoted and intolerant that they must root out and punish anyone who might have a different view?

The libertarian view is that you should be able to associate with anyone you want. You can have a gay lover, but you cannot make others accept you. The Apple Left is all about making others conform to leftist views.


So what’s really going on here? A toxic combination of anti-Christian bigotry and sexual revolution radicalism. ...

But the Left, ever-vigilant against group-based slights on behalf of favored constituencies, is only too eager to label orthodox Christians as threats to the public.

This bigotry has a purpose. It serves to demonize the last significant constituency standing in the way of sexual revolution radicalism. After all, unless you demonize your opposition, the general public will have little appetite for forcing Christians to pay for abortion pills, forcing Christian groups to open up to atheist leadership, or forcing Christian bakers or photographers to help celebrate events they find morally offensive. After all, there’s no clamor for requiring Kosher delis to stock pork or requiring gay lawyers to represent the Westboro Baptist Church.

Update Apparently you get attacked for being neutral:


CNN’s Carol Costello ATTACKED Duke head basketball coach Mike Krzyzewski for refusing to weigh in on the new religious freedom law in Indiana. I’m not kidding. Krzyzewski didn’t come down one way or the other on the law, he simply refused to address it. But because he didn’t fall in line, I guess, with other sports figures condemning the law, CNN does a whole segment attacking him

Many businesses still have signs like this, and they are still legal, as long as the owner is not Christian and the cutstomer not gay, I guess. 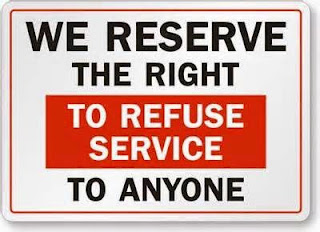 most were picked on growing up so this is the backlash once they get into power, just human nature and not surprising.