But what about the children?

The US Supreme Court has agreed to decide whether there is a constitutional right to same-sex marriage, and the case the Sixth Circuit case where a 2-1 majority said that the issue is up to the legislature, and a woman dissenting judge wrote:


The author of the majority opinion has drafted what would make an engrossing TED Talk or, possibly, an introductory lecture in Political Philosophy. But as an appellate court decision, it wholly fails to grapple with the relevant constitutional question in this appeal: whether a state’s constitutional prohibition of same-sex marriage violates equal protection under the Fourteenth Amendment. Instead, the majority sets up a false premise — that the question before us is “who should decide?” — and leads us through a largely irrelevant discourse on democracy and federalism. ...

Readers ... must have said to themselves at various points in the majority opinion, “But what about the children?” I did, and I could not find the answer in the opinion. ...

Such findings led Brodzinsky to conclude that the gender of a parent is far less important than the quality of the parenting offered and that family processes and resources are far better predictors of child adjustment than the family structure. ...

If we in the judiciary do not have the authority, and indeed the responsibility, to right fundamental wrongs left excused by a majority of the electorate, our whole intricate, constitutional system of checks and balances, as well as the oaths to which we swore, prove to be nothing but shams.

That's right, the dissenter accuses the majority of being too philosophical, too democratic, and ignoring the children!

The kids are not really the kids of these Michigan lesbians, pictured below. They are kids that CPS took away from single moms, and paid the lesbians to raise as foster kids. The dissenting argument is mainly to say that the lesbians have improved the lives of the foster kids, and so should be rewarded with a marriage license and some tax benefits. The CPS files were withheld from the record, and we have no idea whether the mom would have done a better job, or whether the dad was available.

The US Supreme Court will surely side with the gays and lesbians, but there is some doubt about the reasoning. If marriage law can be dismantled because some whiny feminist judge asks “But what about the children?”, then just about anything could be justified by some wacky appeal to the welfare of kids. Meanwhile, check out what happens to lesbian kids. TMZ reports:


Rosie O'Donnell is making a clean break -- leaving her wife AND quitting "The View" ... all in one fell swoop.

Rosie's rep confirmed she and Michelle Rounds are splitting after 2 and a half years of marriage. The couple adopted a baby girl together in 2013. ...

ABC says it fully supports Rosie's decision to spend more time with her family, and adds she'll be coming back to "The 'View" from time to time.

So she is leaving her second so-called wife to spend more time with her so-called family? She had a heart attack in 2012, and banned her first so-called wife from breastfeeding because she was jealous of their bonding sessions.

The courts are going to mandate a drastic change to marriage law so that it will be easier for some wacko like Rosie O'Donnell to adopt a baby. No word on her life expectancy after that heart-attack, or how they terminated the fathers rights for that baby.

These celebrity hamsters will say that just about anything is good for the kids:


Divorce can be good for children because it helps teach them how to “struggle”, actress Kate Winslet has said in an interview.

Winslet, 39, who has three children, told this week’s edition of Harper’s Bazaar UK magazine that she tried to turn negative experiences into positive ones and would not want to change anything in her personal life, such as her two divorces.

“I think it’s very important to teach your children to struggle on some level,” she said.

“I would honestly say that I wouldn’t change a thing. Even all the bad bits. 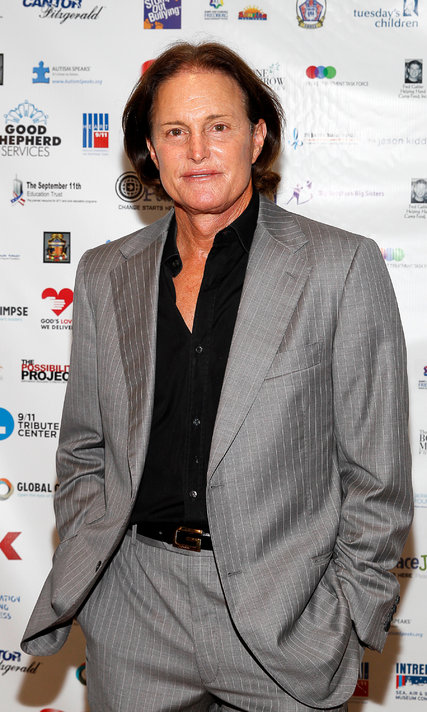 Instead Winslet said she wanted to “keep my health and my sanity and be well fed and happy”. ...

The Oscar-winning actress has a 14-year-old daughter from her first marriage, an 11-year-old son from her second and another young son from her current marriage to Ned RocknRoll, nephew of Sir Richard Branson.

3 kids from 3 marriages, and now she is Mrs. RocknRoll.

The reality TV shows have moved on to the celebrity trans-gendered Kardashian groupies. A liberal NY Times columnist writes:


So, in my book, Bruce Jenner is now a gold medalist again. Come on, Wheaties. It’s time to put Jenner back on the box!

He is now a liberal hero for having Gender identity disorder. He also just killed someone in a traffic accident. See pictures, and he appears to be growing breasts. The female hormones have already made him a bad driver. He has been married 3 times, with 2 kids from each, not counting Kim Kardashian who is busy showing off her naked butt again. If you do not know who these people are, you are lucky not to know. The world is going nuts.
Posted by George at 8:00 AM