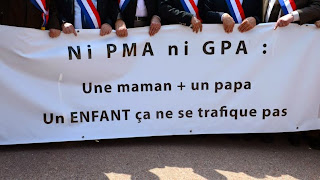 The French approve of politicians having extramarital affairs and of babies out of wedlock, but they are not ready for lesbians raising test-tube babies. Today they are protesting:

The French are mobilizing for October 5, as article after article condemns the recent Appeals Court decision on medically assisted procreation (PMA) and surrogate motherhood (GPA). ...

There is indeed a violation of French law when two women go to Belgium or elsewhere to undergo artificial insemination with a donor, such insemination being forbidden in France. This violation is real but it isn't the only one or the most serious. In today's case, the violation consists mainly in the action of conceiving a child in such a way as to deprive him of a father, not to be burdened with a father and to replace the father with the mother's female partner. The child is thus deprived of his paternal heritage in order to become adoptable. So they are not asking for an adoption, they are hijacking an adoption, and it is this violation of adoption that the Appeals Court has today validated. It had until now refused to validate these procedures for making adoptable babies even when they involved heterosexual couples.

Same thing with American politicians and pastors calling for traditional marriage values to be kept (aka no gay marriage), yet they have a higher divorce rate than atheists, and have tons of extramarital affairs, which if found out, just go through a quick repentance period saying how he "failed everyone".

Fact is these traditional people have some right ideas about marriage but the fact that they overlook the parts of it that are violated the most while focusing heavily on a small subset of people.

I do not see the connection with the atheist divorce rate. If more atheists got divorced, would that be an argument for or against gay marriage?

The French make DNA paternity testing illegal - done to force men who are NOT the father to pay purely on the word of a woman. Do we really need any advice from the French? Come on - they have obviously surrendered to Feminism just like they've surrendered to every other army.

Comparing atheists and more traditional marriages must be done in a fuller context for it to matter anyway. Atheists get married at a lower rate than the religious. There is no need in their view to be married for sex, so the marriage reasons are different, and creates a somewhat self selecting group of people who would be more successful in marriage.