The British do not have free speech:


A British performing artist has been forced to shelve a book based on his experiences of childhood sexual abuse after his ex-wife obtained an injunction to prevent their young son from reading it. In a case that is alarming freedom of speech campaigners and which publishers say is deeply disturbing, the court of appeal has ordered that the artist cannot publish key sections of the book until the issue has been decided at trial.

However, his ex-wife’s lawyers dispute claims that the case could set a precedent undermining the rights of other authors, arguing that it is concerned only with the rights of one child, who has a number of health problems, who they say would suffer catastrophic psychological distress were he to read parts of his father’s work. ...

Let me flesh this out for you a bit. A well-known artist in the UK is publishing a memoir, including sections that deal with the sexual abuse he suffered as a child. His ex-wife obtained the injunction on publishing that factual account of his life because she believes it will harm, by her lawyer's own admission, a single child the two had together. That child is suffering a wide range of health problems, including Asperger's Syndrome, and the ex-wife is suggesting that reading the father's account would cause further harm.

This could not happen in the USA, right? We have a First Amendment for free speech.

As a comment notes, Asperger Syndrome is not even a health problem, and not an indication that a kid is going to suffer from a book being published.

One of our free speech protections is the anti-SLAPP laws that California and other states have passed. Here is how we pass such laws in our great country:

"Two years ago, my partner, Ron Green, introduced me to a guy. That guy’s name was Justin Jones. Justin was running for State Senate in Nevada. … I shook his hand and said “if you will sponsor an Anti-SLAPP bill, I’ll vote for you, and I’ll contribute to your campaign.” He promised me that he would do so. Within days of taking office, he made good on his promise. Today, Nevada has the strongest Anti-SLAPP law in the country"

Okay, not the best example. Maybe the lawmakers were going to pass an anti-SLAPP bill anyway.

Here is another British anti-free-speech law:


British Justice Secretary Chris Grayling stated his intentions today to raise the criminal penalty for cyber trolling in the UK up to a maximum two year sentence, in an attempt to halt the spread of online abuse happening on social media and other sites.
Image via The Next Women

The Malicious Communications Act, which was passed 10 years ago, allows for a maximum penalty of only six months against cyber trolls and other internet troublemakers. Under the law, cyber trolls are defined as "Those who subject others to sexually offensive, verbally abusive or threatening material online."

This includes harassment and stalking, but each broadly defined case is decided by a magistrate or, in severe cases as proposed under the new bill, a crown court -- which means that cyber trolling is open to subjective definition on a case-by-case basis.

Under American law, it is a crime to directly and credibly threaten bodily harm to someone, but not just to use offensive language or name-calling.

We have a special law against threatening to kill the President, and sometimes seemingly frivolous cases get investigated and prosecuted. (Christine Wright-Darrisaw was upset about a child custody case, but just look at her picture and you can see that she is just a loon.) I was surprised when the Santa Cruz Sentinel ran this cartoon on page A9, Oct. 10, 2014. DeCinzo gets a lot of complaints about his mocking local officials, so obviously the newspaper gives him a lot of freedom, but this cartoon begs for a call from the Secret Service. But the agency has been taken over by incompetent affirmative-action feminists who cannot do their jobs, so I guess they are too busy with their own scandals to call. 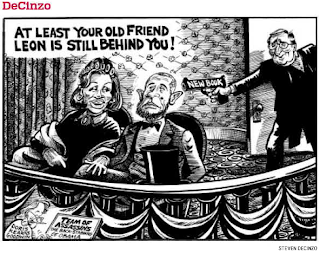 If any SS agents are reading this blog, please don't call me. I do not believe in threatening the President. You should have called the newspaper 10 days ago. The cartoon shows Obama looking like Abe Lincoln when he got shot, but Leon Panetta just wrote a book detailing Obama incompetence in foreign policy. Since you apparently did not call the newspaper, I assume that you consider this cartoon a non-threatening joke.
Posted by George at 8:00 AM

The cartoon is tasteless but non-threatening. Note the caricature in the bottom left corner of famous plagiarist Doris Kearns Goodwin with a book called Team of Assassins. (Oops, almost typed "coroner".)