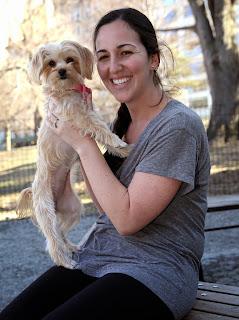 
America’s next generation of youngsters should be called “Generation Rex.”

If you’re wondering why playgrounds around the city are so quiet and dog runs are packed, a new report has an answer: More and more US women are forgoing motherhood and getting their maternal kicks by owning handbag-size canines.

Data from the Centers for Disease Control and Prevention show that a big drop in the number of babies born to women ages 15 to 29 corresponds with a huge increase in the number of tiny pooches owned by young US women, reports the business-news site Quartz.

Dog-crazy New York ladies told The Post that they aren’t surprised by the findings — and that they happily gave up diaper changes, temper tantrums and college funds for the easy affection of their doggy “child.”

The Spearhead agrees that this is a trend.

Sometimes I see a mom or a nanny take tender loving care of a child, and I marvel at the maternal instinct. And then I see a woman do the same with some stupid mutt that looks like an overgrown rodent.

I don't want to bash the dog-lovers. They seem completely normal, compared to the cat lovers.

Meanwhile, the other New York newspaper caters to the kind of rich people who obsess on dogs. The NY Times reports:

Not to brag, but we may have a little genius on our hands. Our 6-month-old is up before dawn playing brain games. She knows her way around an iPad and practically devours puzzles, and I’m teaching her to read. Just recently, she mastered an advanced chess toy.

In the last decade, Mr. Hare informed me, we have learned more about how dogs think than in the last century. As he explained, his own research shows that dogs read our gestures, like pointing, more flexibly than any other animal. Other investigators from Hungary, using functional magnetic resonance imaging, recently announced that the canine brain is sensitive to cues of emotion in human voices. When you pet a dog, another study concluded, both human and canine oxytocin levels increase.

Other findings are hairier. A research article in Frontiers in Zoology last December asserted that dogs align their bodies along a magnetic north-south axis when urinating or defecating, though nobody knows why. My favorite was the classic study conducted in France on why a stranger’s crotch is more interesting to a dog than its master’s.

More curious still was the crowd-funded effort this past winter by a group of Scandinavian designers and “optimistic dreamers” calling themselves the Nordic Society for Invention and Discovery. The team claims to be developing a small gadget called No More Woof, a prototype that uses “the latest technology in microcomputing and EEG to analyze animal thought patterns and spell them out in human language using a loudspeaker.” A dog barks, and the electronic translator will say things like, “Em, why are you guys leaving?”

If someone else printed this, I might suspect a joke.
Posted by George at 8:00 AM

It's all about inability to commit. Small dogs can be disposed of. Kids, not so easily (although there's the occasional news story about mothers who try).

Here is one of those occasional news stories:

Megan Huntsman was clear about what she did with six of her newborn babies.

Huntsman, 39, told police she either strangled or suffocated them immediately after they were born. She wrapped their bodies in a towel or a shirt, put them in plastic bags and then packed them inside boxes in the garage of her home south of Salt Lake City.

What's not clear is why. A day after her arrest on charges of killing her six babies, investigators and her neighbors puzzled over the grisly discovery, including how she could have concealed a half-dozen pregnancies over a 10-year period.