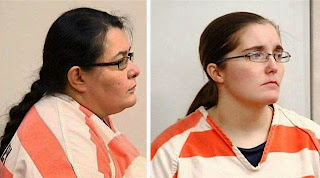 Here is an update on an earlier story about lesbian child abuse:


The stakes just got higher for a couple accused of starving and abusing their three young children and keeping a young girl chained to a wall inside their Russell Road house in Salinas.

If the two women are convicted of torture, they could be sentenced to a life prison term.

Deanda and Craig remain behind bars and their preliminary hearing is scheduled for June 6. They have pleaded not guilty to all charges.

Monterey County Sheriff's investigators said the women abused the girl and two boys, ages 3 and 5, over a long period of time.

The warrant, which refers to the 8-year-old girl as "Jane Doe," stated that when deputies arrived at the house for a welfare check on the children, the girl had several physical injuries, a scar on her head, dark circles under her eyes, and she weighed just 40 pounds.

Sheriff Scott Miller said the girl looked like someone who had come out of a concentration camp when she was rescued from the house.

"All the children were taken out of schools to prevent contact with police or counselors," the warrant states.

Here is the search warrant with more info, but many questions are unanswered. Who thought that it was a good idea to give a couple of kids to these lesbians? Who is the natural father to the third kid?
Posted by George at 8:00 AM