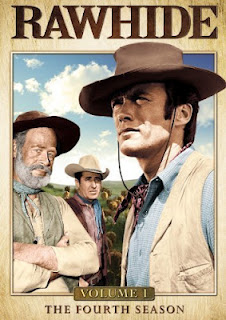 I just watched this 1962 Rawhide episode:


The Boss's Daughters
Favor's herd is prevented from passing through private land that is the only tenable route going north to the Kansas destination. However the landowner will relent if Favor gives his permission to allow the landowner to adopt Favor's two young daughters (who happen to be visiting Favor) when he marries Favor's sister-in-law, who has been caring for the children. If Favor is opposed to giving up his children, and if he refuses the adoption scheme, he will be forced to either fight his way through the private land or head the herd south and around through the dessert, losing much or all of his herd to the severe elements.

The daughters look and act just like my daughters. Except that Favor's daughters are loyal to their real father. And the men settle their disputes with guns, wire cutters, cattle, and man-to-man confrontations, instead of shrinks, feminists, and judges.

After listening to an argument about "what's best" for his daughters, and how he would have visitation privileges comparable to how often he sees them anyway, the dad (Favor) says:


But logic and reason ain't got nothing to do with it. There is a big difference between thinking and feeling. No, I am not going to lose them at all. ... They are my daughters, and they belong with me.

Well put. He faced the same family court logic and reason that says that a dad should be willing to give up his kids as long as he is still writing support checks and getting visitation privileges, because that is what's best. No, it is not best. People had more common sense back in 1962.

The modern family court is a great mistake. We were much better off in an era where men were men and women were women. I am an anachronism like Favor or Clint Eastwood (who also starred on Rawhide).
Posted by George at 8:00 AM