Batgirl takes down the sheriff 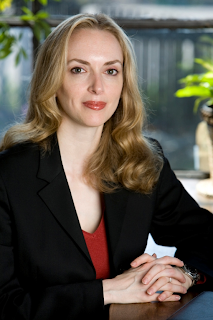 I posted below about the new SF CA sheriff being charged with domestic violence. Here is the accuser:

Ivory Madison is the founder and CEO of ..., which the press calls "Facebook for authors." A former management consultant, Madison has trained teams at startups and Fortune 500 companies, and coached CEOs and executives, on effective writing.

Madison also ... was named "Best Writing Coach" by San Francisco Magazine. Madison had earlier dropped out of high-school and gone directly to law school; her legal career included ..., and serving as a Law Fellow for Americans United for Separation of Church and State. Her recent graphic novel, Huntress: Year One, was published by DC Comics and is in its second printing. ...

She writes comic books! That is, she writes the text and someone else does the illustrations. Huntress is a Batman/Batgirl spinoff:

As the last survivor of a crime family eliminated by bloody rivalries among the mobs of Gotham City, the orphaned Helena Bertinelli grew into the mysterious vigilante known as the Huntress.

New writer Ivory Madison shines a light on the dark underbelly of the mob world spanning from Gotham to Sicily, exploring exactly what led Helena away from a life in the Cosa Nostra criminal society and set her on a path of vigilantism. Also, find out more about Batman's first meeting with the fledgling female crime-fighter and why, to this day, they struggle to see eye-to-eye.

So Madison is a smart unmarried feminist San Francisco lawyer who lives in a fantasy world of being a vigilante Batgirl.

I say that Madison is the accuser, but she is not the alleged victim. She is just a self-appointed do-gooder who decided to intervene into a friend's marriage.

Appearing slightly stunned, Mirkarimi said he was "confident that in the end we will succeed in showing the missteps" of the investigation. Asked if he would step aside while the case proceeds, he said he has "no intention of leaving.… We'll prove that we are right."

Lopez has hired an attorney, is not cooperating with the investigation and has not spoken with the district attorney's staff. She was more strident Friday than her husband, repeatedly calling the charges "unbelievable."

"As I've said before, I don't have any complaint against my husband," Lopez said. "We are together and we are fine. We are going to fight this. This is my family, my husband and my son.… This is completely wrong."

The incident came to light after Lopez confided to a neighbor about a New Year's Eve fight with Mirkarimi. The neighbor, Ivory Madison, photographed and videotaped a bruise on Lopez's arm, texted with Lopez about the incident and later called police.

Madison, who co-hosted an October fundraiser to benefit Mirkarimi's run for sheriff, declined to turn over the messages and photos to authorities, saying Lopez had asked her not to. But investigators seized the materials after serving a search warrant.

Gascon would not discuss specifics of the incident, except to say that "we feel very comfortable based on the evidence presented that we have sufficient evidence" to obtain a conviction.

He acknowledged that "a case is always stronger if the victim is willing to testify," but he said that it is "very common for victims to be uncooperative in domestic violence cases," either because they fear retaliation or the consequences to the family.

Lopez is a former Venezuelan TV star from Spanish soap operas. She probably had no idea about the evils of the American justice system, or how easily she could be double-crossed by an American woman friend.

The DA is probably right to be confident about getting a conviction based on such flimsy evidence. Usually a criminal case requires witnesses who can testify that the defendant committed each element of the crime, and hearsay is not permitted. Here, they have a friend who can testify that she took some pictures of some bruises, but there is no one to say how it happened. Usually the wife cannot be forced to testify. Maybe they will try to make the son testify.

Sheriff Mirkarimi probably understands what he is up against. He has probably taken similar actions against other men himself. He knows that he won't get a fair trial on the merits, and he is reduced to showing the missteps of the investigation.

Madison is a smart lawyer who knew exactly what she was doing when she made a police report. She knew that the cops would get a search warrant so that it would look as if she was not betraying her promise to her friend.

San Francisco is famous for drama like this. I am looking forward to the trial, and I hope it exposes all the ugly warts in the domestic violence system.
Posted by George at 8:00 AM

At least Madison heard Lopez's story, saw her injury, and reported to police, unlike Mike McQueary who passively told only his boss after seeing Jerry Sandusky rape the boy in the locker room shower.

The problem is, Lopez won't cooperate with investigators, and although criminal cases are routinely dropped because the victim wouldn't testify (such as Kobe Bryant's accuser), would the SF DA office find political motivation to go after Mirkarimi? Furthermore, if prosecutors do go ahead with a trial, they will rely on either hearsay (Madison) or an unreliable witness in Mirkarimi's 2-year-old son.

Also here's a new article by the SF Chronicle with more revelations including a past incident between Mirkarimi and Lopez: "Earlier Mirkarimi abuse alleged in wife's video"

Yes, there is some more info. Apparently another neighbor is a witness. Part of the marital dispute seems to be rooted in child custody concerns. If they each had child custody rights that the family court would protect, maybe they would not be fighting.

It's only a little consolation to know that I am not alone. I've been denied the right to see my children for seventeen months now because my wife has accused me of some things which will ultimately be proved lies.

The judicial system is incredibly corrupt. While I was on the stand the judge in our case was doing online shopping rather than listening exclusively to what I had to say. Am I wrong to think he should be listening to our case with both ears rather than searching for deals at Gavels-R-Us.com or whatever?

While my wife was on the stand (and partially exposed for a few of her lies) the judge again wasn't listening. Someone had come in from another room to give him technical help on his computer. How the hell are you supposed to get a fair shake if the judge doesn't listen to either side?

<> Eliana Lopez said: "You are destroying my family". says it all.

The neighbor Ivory Madison has triggered a witch hunt, This case is totally Overblown.

This couple young son, is ironically the one, who will suffer the long term consequences of the very public lynching of his daddy's character and reputation.

The judge reasoning for temporarily braking up this family was that the situation is still volatile, sure, it is volatile (Mostly In the media and on blogs).

Using statistics to justify decisions or opinions in individual cases by bloggers or the court is wrong.


The system needs to be reformed, it is NOT working.

Note: Latino Ladies are among the world's finest mothers, they are the ones who should rise up to defend the dignity and integrity of Eliana Lopez family.