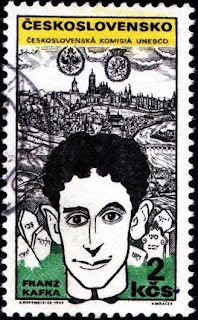 The NY Times magazine has a long article on Franz Kafka's papers:

Bornstein was alluding to the famous parable in “The Trial” about a man who comes before the law but is turned away by the doorkeeper. The man asks if he will be allowed to enter later. “It’s possible, but not now,” says the doorkeeper, explaining that he is only the first in a series of increasingly powerful and terrifying doorkeepers (“The mere sight of the third is more than even I can bear”). The man sits next to the entrance for hours, days, years, waiting to be admitted to the law. In his dying breath, he asks the guard a question: Since the law is open to everyone, why has nobody else approached it in all these years? “This entrance was meant solely for you,” the guard says. “I’m going to go and shut it now.” Like many of Kafka’s stories, it carries the dreamlike impact of a great revelation, while nonetheless not making much immediately apparent sense.

In the book, the man never finds out why he is being put on trial.

I thought that Kafka's book was some sort of nightmare that could only be dreamed by someone in Eastern Europe. In America, you would always be notified of the charges against you, at a minimum.

And yet I am facing a trial in a couple of months. There is no accusation of wrongdoing against me. There is a witness who will testify against me. I know that because I have to pay him $6,500. For that money, he will say that his opinion is that I am not in the best interest of my kids. But he is unable to find any imperfect parenting on my part, and he denies that he has any responsibility to do that. My only hope is that the judge is not in on the conspiracy, and she is able to see what a charlatan he is.
Posted by George at 8:00 AM

Email ThisBlogThis!Share to TwitterShare to FacebookShare to Pinterest
Labels: court