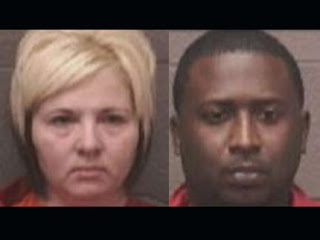 An 11-year-old boy is being praised by Lawton police after he called 911 to report his mom and her boyfriend were dealing drugs from their home. ...

Lawton police called the boy's actions courageous. The call led police to the house where they found the boy with his 1-year-old brother along with a quarter pound of marijuana and other drug paraphernalia.

Patterson and French were both charged with felony counts of drug possession with intent to distribute.

Courageous? To call 911 to betray his own mom? Where is the dad?

My guess here is that mom has already used false accusations and restraining orders to cut the dad out of the boy's life, and to get more child support/welfare. The boy learned to betray his family at a very early age. Then he got sent to public school, where he was taught that 911 operators and other govt agents are greater authorities than parents. Then the mom shacked up with a no-good drug-dealer, and no one objected to that. The dad was driven out, and anyone else would have been accused of being discriminatory.

I live in a county full of dope smokers, so I don't think that the cops would bother with a couple having only a quarter pound of marijuana. But the schools, cops, and others would encourage kids to betray their parents.

This is the decline of the USA, in my opinion. In another generation, no one will think that there is even anything wrong with this story.
Posted by George at 11:05 AM

we're paralleling both the former Soviet Union and Nazi Germany in that the children are indoctrinated into believing the state is the ultimate authority. Children in those cultures were exhorted in school to report "anti-state" behavior to the authorities and then subsequently praised as heroes.

I try to avoid the Commie and Nazi analogies, but I agree with you.

just drawing parallels to what's been done historically in other governments that were statist, nothing more. There are other examples but those are the best known. We're still a long way from what those governments did, but we are pointing in that direction in many, but not all ways, nor to the same degree. Like a lot of your readers, and no doubt you, George, I'm just concerned of the slippery slope we're treading down, that's all.