State shrink fakes her own rape 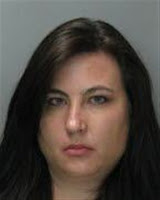 SACRAMENTO, Calif. — Authorities allege a woman was so determined to convince her husband of a need to move to a safer neighborhood that she faked being raped.

She split her own lip with a pin, scraped her knuckles with sandpaper, had her friend punch her in the face, and even wet her pants to give the appearance she had been knocked unconscious, authorities said Friday. ...

It didn’t work. Instead, the couple filed for divorce six weeks after the April 10 incident, according to court records. ...

In reality, the items were all at the home of her friend, Nicole April Snyder, authorities allege. Investigators say Martinez had Snyder punch her in the face with boxing gloves they bought for that purpose.

Wondering what kind of low-life would pull a stunt like this? Here is the best part -- she is a California prison psychologist!

Martinez, 36, a psychologist for the California Department of Corrections and Rehabilitation, reported she had come home that day to find a stranger in her kitchen, authorities said.

I am happy to say that she is not Jewish. No Jewish psychologist would do anything so stupid.
Posted by George at 8:00 AM

What the heck is this loser talking about?

George, we know that they all lie, especially in SC County.

I deleted an abusive comment. I realize that some of my posts have been inflammatory. If I am wrong, then go ahead and tell me why I am wrong. But name-calling is not constructive.

No Jewish psychologist would do anything so stupid.

How do you know ? Did the Nazi's do some sort of experiment to determine this ?

Martinez is a Spanish Sephardic Jewish surname that means "son of Martin." Sephardic Jews are those whose ancestors came from Spain. The Martinez family is one of the families that converted from Judaism to Christianity in the mid-15th century. Their name appears in books about the converso inquisition trials of that time period.


Read more: What is the history and origin of the Sephardic surname Martinez? | Answerbag http://www.answerbag.com/q_view/2234294#ixzz1gFqQuIed

Yeah. He can dish it out, but he can't back it up.

I had never heard of it, but the JIDF stands for the Jewish Internet Defense Force is a militant Zionist organization that tries to attack web sites that express opinions that are contrary to what it regards as the purposes of Israel and Jews. I doubt that the JIDF would have any interest in this blog. However I will have to delete disruptive and inappropriate comments.

dude, I enjoy reading your posts sometimes, but what do you have against Jews? I am Jewish and it seriously makes me sick to hear the way you talk about us.

I did not criticize Jews here -- this psychologist is not Jewish.