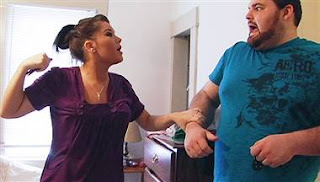 During a September episode of season two of the MTV hit show, Portwood was seen repeatedly slapping, punching and kicking her then-fiance, Gary Shirley. Police said that Portwood is facing felony charges because Portwood and Shirley's young daughter, Leah, was present when the alleged violence occurred.

Portwood faces fines of up to $10,000 and three years in jail if she's convicted.

Three years in jail for a fight on a reality TV show? All because a toddler is a witness? Of course no toddler will testify -- they will just use the MTV tapes.

Apparently the teen mom has been dating 3 other guys, besides the dad. She likes being a TV star. Her toddler is living with the dad.

What we have here is a feminist man-hating domestic violence law being written in a sex-neutral manner, forcing silly prosecutors to throw the book at a girl who actually initiates the attack. They probably disapprove of the behavior being shown as acceptable on TV. And the dad takes responsibility when the mom turns into a nut case.
Posted by George at 8:00 AM