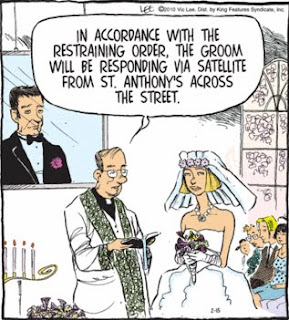 Police in Hamilton County have arrested hundreds of people in the past year because of a criminal complaint system that the county's top prosecutor says is bad public policy and some judges say violates Ohio law.

The system has allowed court clerks - rather than prosecutors or judges - to approve and issue arrest warrants based on complaints from private citizens.

Those complaints have sent people to jail for domestic violence, theft and other misdemeanor offenses despite a 2006 Ohio law that requires a judge or prosecutor to review complaints before someone is arrested.

A fellow angry dad wrote to me and said that he got arrested under this procedure:

I was one of them. My ex-wife told me not to contact her anymore. When I called to talk to the kids, she had me arrested for telecommunications harassment.

I do not think that any man should ever be arrested for placing a phone call to the mother of his kids. Not ever. Restraining orders limiting phone calls should never issue.

If she does not want to take the call, she can hang up. Or not answer the phone. Or change her phone number. Or use an answering machine to screen calls. The solutions are trivial.